The organizers of this year’s World Cup in Qatar are facing heat for a range of controversies. But when athletes hit the field, they’ll be nice and cool, despite scorching temperatures outside. That’s because the open-air arenas the country constructed for the tournament are air conditioned.

Although that’ll help make players and spectators more comfortable in Qatar’s hot climate, the use of air conditioning outdoors isn’t easing environmentalists’ concerns about the Gulf petrostate’s hosting of the tournament. Qatar’s World Cup organizers say the technology was designed with sustainability top of mind. But some climate advocates argue that it sends the wrong message at a time when the world is facing an energy crisis and trying to reign in emissions. They worry that, with such a publicized precedent on the global stage, outdoor air conditioning might become a dangerous new norm as the planet gets hotter.

Here’s what to know about outdoor air conditioning being used at the World Cup.

Qatar is one of the hottest countries on earth. That’s already taken a deadly toll on many involved in event preparations. Thousands of migrant workers who powered the World Cup building boom have died over the past decade, many because of poor working conditions made more dangerous by excessive heat.

This year’s World Cup is being played in November and December in an attempt to beat the searing heat; most World Cups are held during the summer months, when temperatures in Qatar regularly exceed 100°F.

Still, the average November high temperature in the Gulf state is around 85°F , and extreme heat can take a toll on athletes, causing illness and negatively impacting performance.

Air conditioning will help make play more bearable. A TIME journalist who in August visited the Lusail Stadium, an arena about 12 miles north of central Doha that will host the World Cup Final, described it feeling like a fresh spring day inside the venue, despite outside temperatures of 118°F .

Thanks to air conditioning, temperatures at World Cup matches are expected to be about 68°F, no matter the conditions outside.

The technology, developed with Qatar University, cools air and distributes it via grills in the stands and through pitch-side nozzles. “We only cool around where the people and players are,” Saud Ghani, a professor of engineering at Qatar University nicknamed “Dr. Cool” for his work on cooling gear, tells TIME.

Pre-tournament photos show under-seat grills at Lusail Stadium (top) and pitch-side nozzles at Ahmad Bin Ali Stadium (bottom). These are used to blow cooled air into the arenas in Qatar.

“Spot cooling means we only cool the areas where people need it—like on the pitch and in the stands,” Ghani told FIFA. “The form of each stadium acts as a barrier, which contains a cold bubble inside. Our air circulation technique cools the air, filters it, and pushes it out towards the players and fans. Each stadium is cooled to a comfortable temperature.”

Ghani says the aim of the air conditioning is to allow players to play safely and for fans to “feel neutral,” as opposed to too cold, though some fans reported being too cold in the arena hosting the breezy opening night, according to the Associated Press. Ghani adds that a lot of work has been done to stop the cool air inside stadiums from mixing with the hot air outside. “The trick is to make sure that you keep your bubble isolated, the micro bubble from the macro bubble outside,” says Ghani. “Cold air is heavier, it stays at the bottom. Hot air is lighter and stays on the top,” he says, likening the physics to oil and water.

Is outdoor air conditioning bad for the environment?

All air conditioning is terrible for the environment. Planet-warming hydrofluorocarbon gasses can leak into the atmosphere as the coolant escapes AC units when they reach the end of their life. Increased air conditioning use can also put a strain on electricity grids, often powered by fossil fuel energy; together with electric fans, air conditioning accounts for 10% of global electricity use. Demand for air conditioning worldwide is surging as the planet grows hotter. But more air conditioning requires more energy, the generation of which produces more greenhouse gasses that make the planet warmer, creating a vicious feedback loop.

In Qatar, air conditioning accounts for 60-70% of Qatar’s total electricity demand, according to local media. World Cup organizers like to point to a new 800 MW solar power plant that was connected to the grid last month, which promises to supply 10% of the country’s peak power consumption, but the country still gets the vast majority of its energy from fossil fuels.

Read More: Air Conditioning Will Not Save Us From Global Warming

Ghani says that sustainability was a key consideration for this World Cup’s preparations from early in the design process, considered in every detail from where materials were sourced to how the grounds would be used after the tournament ends to how the shape and color of the stadiums would influence the temperatures inside. Ghani says that his technology uses 40% less power to cool a similar space that uses traditional technology. He adds that the solar project, which opened in October, will contribute to the diversification of Qatar’s energy mix.

Organizers spent hundreds of billions of dollars to build most of the World Cup venues and other infrastructure from scratch, and detractors question how useful all of it will be after the event concludes. As for flying, as many as 1.7 million people from all over the world might visit Qatar during the tournament, according to estimates by the country’s Civil Aviation Authority. And with not enough hotels in Qatar to accommodate all the fans, daily shuttle flights from some neighboring countries, like the United Arab Emirates, Oman, and Saudi Arabia, will be running throughout the tournament.

Several sustainability advocates and organizations have accused the tournament’s organizers of “greenwashing” and scoffed at claims that this will be the first-ever “carbon-neutral” World Cup. They accuse the organizers of undercounting the carbon emissions that the event is responsible for and relying on questionable carbon credits to offset the tournament’s real impact.

What does this mean going forward?

Extreme weather is becoming a more pressing problem for the organizers of global sporting events. At the Tokyo Olympics in August 2021, for example, more than two dozen people suffered from heat-related illnesses, despite mitigation measures like ice jackets, mist sprays, and moving competitions to cooler times of the day.

Read More: What Extreme Heat Does to the Human Body

Diab points out that the use of climate control in sport is already widespread, citing European club stadiums, which are heated in winter, and under pitch heating, which has become standard to create ideal conditions. “It is highly problematic that Qatar has built air conditioned open-air stadiums, but it’s indicative of a broader problem in professional sports,” he says. “Professional sport has become very, very energy intensive and in many ways, very wasteful.” 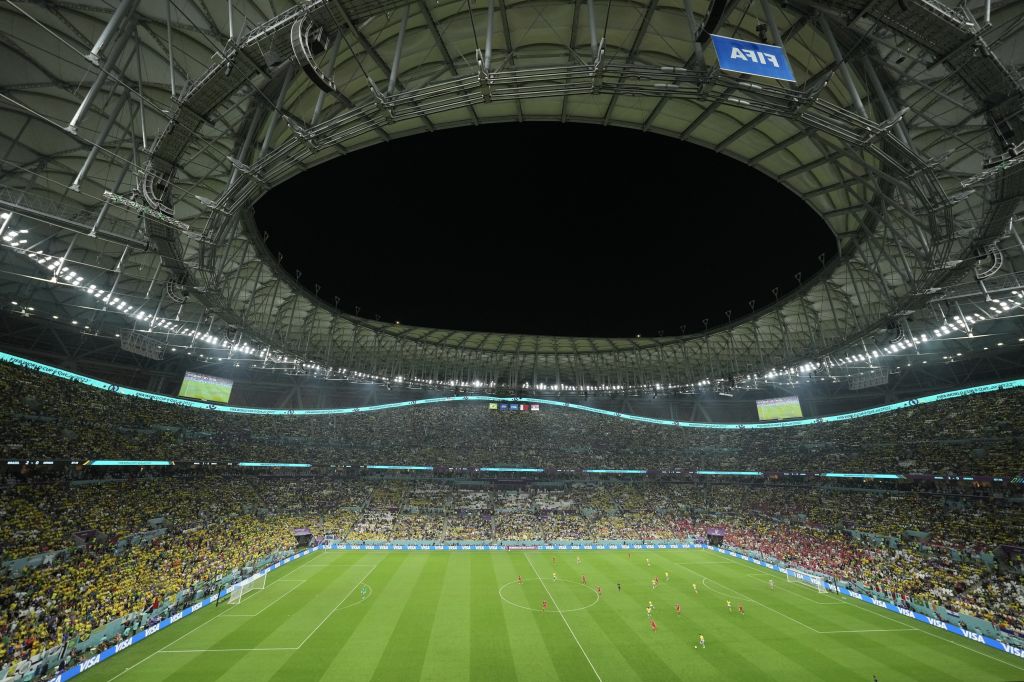 A view of Lusail Stadium during the World Cup match between Brazil and Serbia in Qatar on Nov. 24, 2022. Some experts worry outdoor air conditioning may be adopted elsewhere, particularly in stadiums where energy efficiency may not have been built in to the original design.

Some experts worry that the outdoor air conditioning in use at the World Cup may set a dangerous precedent that’s adopted elsewhere. “Even if the venues in Qatar are able to use renewable energy to power the air conditioning, it suggests to others that this a ‘normal’ thing to do,” says Russell Seymour, the executive chair of the British Association for Sustainable Sport, “leading others to possibly use inappropriate technologies in other outdoor areas.” Seymour acknowledges the designers’ claims that they have optimized the stadiums to hold the cool air inside, but he says that other venues might not have such design features built in. He adds: “It may also lead other outdoor spaces to think that external cooling is acceptable when it takes significant resources in terms of the energy used and in the construction of the units and refrigerants used.”

Ghani is aware of the criticism, but he says that organizers in Qatar went above and beyond to take sustainability into consideration for this year’s World Cup. “What we’ve done is a demonstration of sustainability in action in such big mega projects,” says Ghani. “It’s something that people should learn from, rather than just criticizing it without the knowledge,” he added. “We’re designing for the future.”

—With reporting by Aryn Baker/Qatar

Write to Amy Gunia at amy.gunia@time.com.