Early in the pandemic, then-New York Gov. Andrew Cuomo was a daily presence on television, calming worried citizens and updating viewers on his state’s efforts to build hospitals and acquire medical gear to fight the growing toll of hospitalizations and deaths.

All that material, paid for by the federal government, included what is now surplus. It recently was found up for auction in a cavernous space in upstate New York.

Tall stacks of two-by-fours, 11 piles of white metallic doors and 32 cardboard boxes packed to the brim with lighting fixtures are just some of the items lining the inside of the New York State Preparedness Training Center. Each is tagged with a bright yellow sticker and a black number. Potential buyers weave through the aisles looking around the room, talking on the phone as they plan their bidding strategy.

AAON units up for bid in Oriskany, New York.

They’re looking at FEMA supplies from the COVID-19 pandemic. New York state is hoping to turn it back all into cash.

Joe Brill, of the state’s Office of General Services, said the state department of health reviewed its inventory to pull out any items the state could need in the future. What’s left is up for bid.

Other items included 9,000 gallon oxygen tanks, generators, lighting, air filters and even ambulances. Buyers follow an auctioneer who’s yelling from the back of a truck as it drives through the lot. 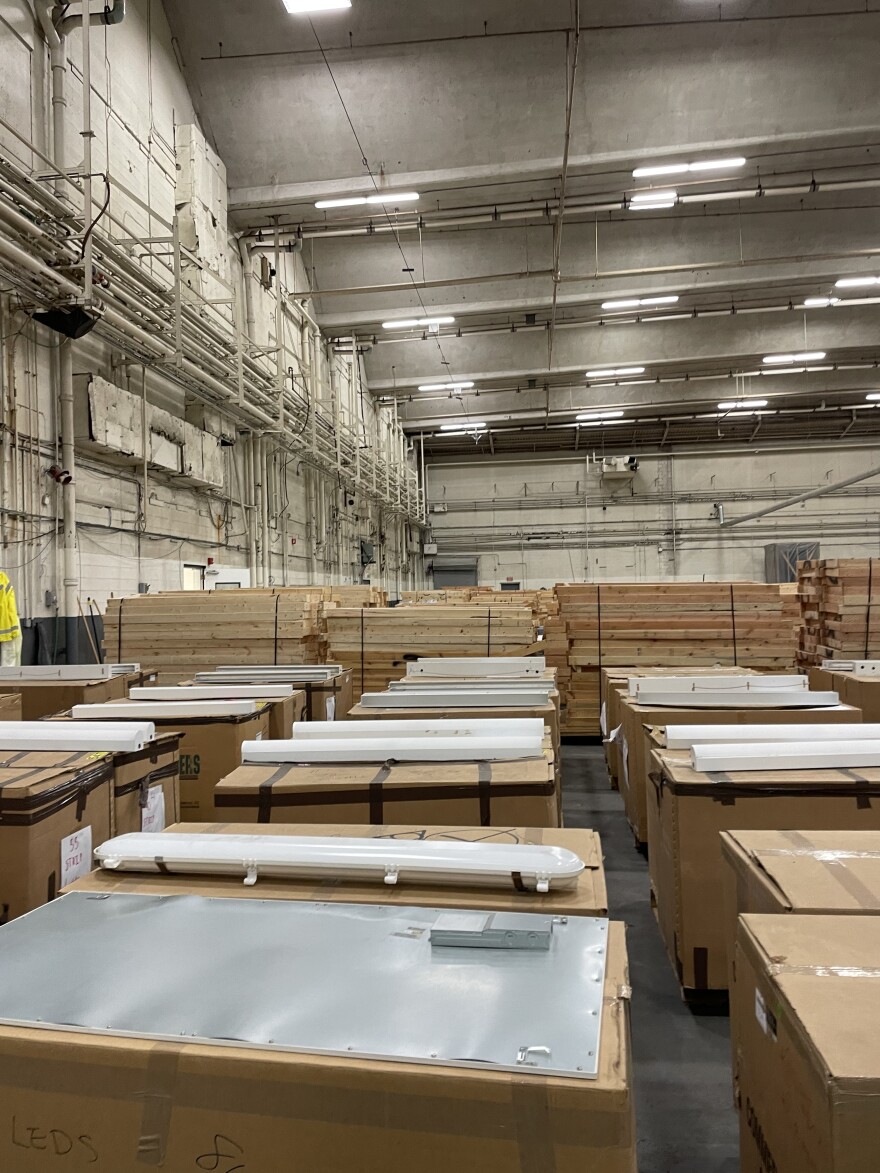 Boxes of lighting and stacks of lumber at the Oriskany auction.

His assistant calls out bids made by an online pool of buyers separate from the in-person crowd bids. The auctioneer gazes over the buyers and rattles off prices increasing by $25, $50, $100 dollars as he gauges the mood of the crowd, often selling lots in less than a minute.

A bulk of the auction also takes place outside since equipment like transformers, HVAC units and buses are too large to store inside. After the auction finishes, the buyers have just a few days to haul their finds away.

Some people bid on almost everything but Doug Slawson takes a more reserved approach. He represents a bridge building company and came with a specific list of items which today includes lights – but only if it’s below his target price.

“I don’t feel the need to bid on anything unless I know I’m going to get below my number,” Slawson said.

Karen Abbott is bidding on items with hopes of reselling them. As the auctioneer is trucked from lot to lot, Abbott follows close behind – bidding on items, like fans, even if she doesn’t know exactly what she’ll do with it.

“I don’t know what they are,” Abbott laughs. “There’s some kind of fan, I’ll figure it out when I get him back in my yard. I don’t know.”

As the auction comes to a close, bidders head to pay for their purchases and volunteers start moving piles of bought items with forklifts to be ready for pickup. New York’s Office of General Services says the auction brought in more than $1.4 million which will primarily go into the state’s general fund.

Chemours’ Minjin Kim Named One of Engineered Systems “20 to Watch: Women in HVAC”