KYIV, Ukraine — Surrounded by apartment buildings, a workman in a back hoe cuts a deep trench in the snowy ground. His colleagues prepare to lay a replacement power line that will serve several thousand residents.

“Our guys always have a lot of work to do,” says Yurii Herasko, a manager with DTEK, the country’s largest private energy company. “We’re always working, 24/7. We have to be prepared for the winter.”

To be clear, this neighborhood on the southwestern edge of Kyiv was not hit by a Russian missile. Ukraine says those sites are off limits to the public and the media out of concern they could provide valuable information to Russia.

But this repair work is part of the scramble to keep the lights on amid the Russian airstrikes that have been hammering Ukraine’s energy system for the past two months. The latest strike was on Monday, and while it knocked out power and water in several cities, it was not as damaging as other recent attacks.

Civilians take shelter in Akademmistechko Metro during an air alert in Kyiv on Monday. Russia renewed its missile attacks across Ukraine on Monday.

Across the street from the repair site, Tetiana Tolstobrova, 60, has brought her grandchildren to a playground, where they’re waging a spirited snowball fight. Speaking over the roar of the machinery, she says the electricity workers are critical for Ukraine.

Ukraine’s power companies, including state-run Ukrenergo and private firms like DTEK, have been able to make repairs quickly when Russia attacks. Power is usually restored within 24 hours. It’s dangerous work. Several workers have been killed in the missile strikes on dozens of facilities.

Despite these efforts, the repeated Russian assaults since Oct. 10 have made the electricity system more vulnerable and daily power cuts are almost universal.

Ukraine’s energy producers can no longer generate enough electricity to meet demand, and therefore have to impose scheduled power outages, often in blocks of four hours at a time. The good days are when there’s just one of these power cuts.

President Volodymyr Zelenskyy’s government has set up 4,000 care centers at schools and government buildings to provide heat, food and water at times of extended blackouts. The government calls them “points of invincibility.”

Tolstobrova says she and her friends have set up their own informal “points of invincibility.” Tetiana Tolstobrova, right, with her daughter and grandchildren in Kyiv on Wednesday.

Since the Russians invaded in February, the Ukrainians keep figuring out new ways to adapt.

When Russian troops were bombarding the Kyiv region at the beginning of the war, city residents camped out in subways to stay safe.

Now the Ukrainians are factoring power outages into their daily routine.

“I only use the stairs,” says Taras Kobets, a bus driver who lives in a seventh-floor apartment. “I don’t use elevators because you can get stuck in there. And if I get stuck, I’ll be late for work.”

He adds with a smile, “This is my exercise. It’s good for my health.”

In many apartment buildings, residents leave boxes of food and water in the elevator for those who do get trapped when power goes out. 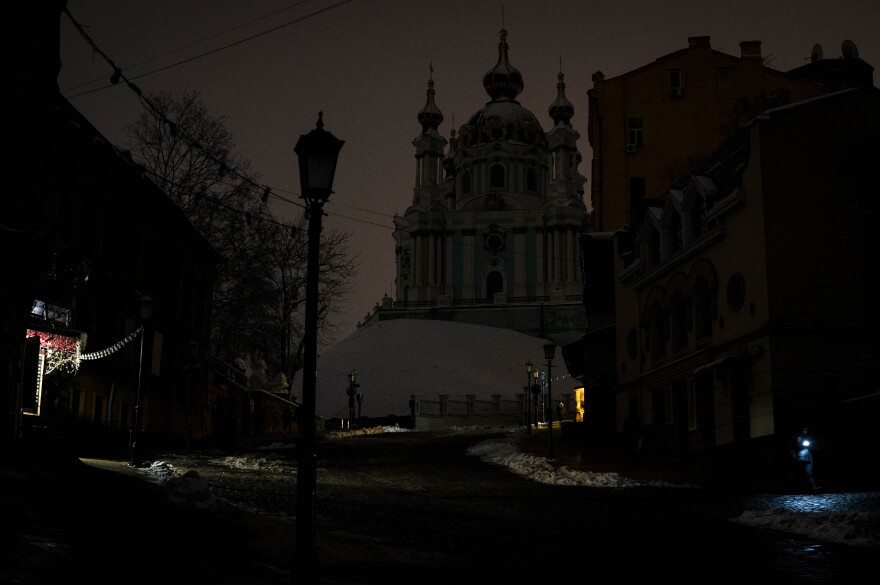 St. Andrew’s Church looms above the darkened Andriivskyi Descent in Kyiv on Nov. 28.

This resilience is serving Ukrainians well. Still, Kyiv Mayor Vitali Klitschko has warned of blackouts that could last for days. He’s urging city residents to move in with relatives in the countryside, where they can burn wood for heat. But so far, he says, they’re staying put.

“I talked to our citizens and they are very angry, and ready to stay and ready to fight,” Klitschko said. As he was speaking at a conference last week, an air raid siren went off, though this time, no actual attacks followed.

Russian troops having been losing ground on the battlefield the past few months. But Russia is betting it can break Ukrainian resolve by making life for civilians unbearable this winter.

NATO countries have responded by stepping up assistance for Ukraine’s power systems.

“The United States has just provided $53 million in new equipment: transformers, generators, spare parts,” U.S. Secretary of State Antony Blinken announced at a conference in Romania last week. “That’s going to get to Ukraine not in a matter of months, but in a matter of days or weeks, to make sure that we’re helping get the electric grid back and functioning.”

Herasko, the official from the electric company, says the need is urgent.

“It’s getting hard to find equipment, especially those that deal with high voltage lines,” he says.

As a large country with an expansive power grid, Ukraine transmits electricity from power stations at up to 750,000 volts. When the electricity reaches neighborhoods, like the one where the repair work was taking place, transformers greatly reduce the voltage as the power then goes to homes and businesses.

The Russians have targeted and destroyed many of these high-voltage transformers, and Ukraine acknowledges it’s struggling to find replacements.

In normal times, this can take months because the transformers have to be made to Ukraine’s specifications. European networks, for example, tend to use transformers that handle a maximum of 400,000 volts, and therefore aren’t suitable for Ukraine.

Herasko, like most Ukrainians, endures multiple power cuts at his own home that often add up to 12 hours a day.

But he adds, “we will survive this winter, and we will win the war.”