The story of how 34-year-old Michael DiNello of Schaumburg ends up as one of Captain Hook’s pirate henchman in pursuit of Tinkerbell starts on a summer day in 2015. The sun was beating down and the temperature was pushing 100 when DiNello got his life-altering phone call.

“I was on the roof, repairing a fan motor on a commercial air conditioner,” remembers DiNello, who, after graduating from Schaumburg High School in 2006, studied at Environmental Technical Institute to become a heating, ventilation, air conditioning and refrigeration technician.

A buddy he met as a teen doing BMX tricks on his bike at Scrap Skate Park in Hoffman Estates was part of a BMX team performing with Ringling Bros. and Barnum & Bailey’s Circus Xtreme. He asked if DiNello wanted to join the circus.

“You know what? I would be interested in that,” said DiNello. “That sounds like a wonderful opportunity.”

He fixed the AC unit, flew to Anaheim, California, nailed his audition, gave two weeks’ notice at his HVAC job and began his circus career as a BMX stunt performer in September 2015.

He got to work alongside elephants, clowns and the person who gets shot out of a cannon. When that show was retired in May 2017, DiNello moved to Orange County, California. “I figured air conditioning would be popular out there, so I brought my tools with me,” he says. “That was paying the rent.”

Having honed his jumping abilities as a Schaumburg teen riding his BMX bike over obstacles, Michael DiNello, left, learned how to do the same on figure skates to land a job with the Disney on Ice show coming Thursday to Allstate Arena.
– Courtesy of Disney on Ice

Kenny Short, a hockey player from Minnesota who met DiNello when they were both working at the circus, was working for Disney on Ice and wondered if they could do their BMX performance on an ice rink. “We workshopped to see if we could add it to the show, and — spoiler alert — it turned out working pretty well,” DiNello says.

He rode his bike through the ice ramps as part of Disney of Ice’s “Road Trip Adventures” show. Having bought a pair of inline skates in California and gotten pretty good, DiNello bought a pair of ice skates in 2019 and quickly learned how to handle himself on the ice. “I started skating almost every day,” he says.

So even though bikes aren’t a part of “Mickey’s Search Party” coming to Rosemont’s Allstate Arena Thursday through Sunday, DiNello now is part of the skating cast. While professional figure skaters are known to perform a “flying camel” spin, DiNello appears in a camel costume on skates for a scene from “Aladdin.”

“I was able to push inside the camel,” says DiNello, who doesn’t mind not being the center of attention. “Anonymity is not always a bad thing.”


He skates as a caretaker to Ham the pig in a “Toy Story” number, jumps off a ramp as an ice harvester during a scene from “Frozen,” and plays an evil character in the “Peter Pan” performance.

“I am one of Captain Hook’s pirates. We’ll stop at nothing to capture Tinker Bell and get this magic to Captain Hook,” DiNello says. “Well, it starts off well, but Mickey and his pals always have different plans. It’s not for lack of effort, that’s for sure.” 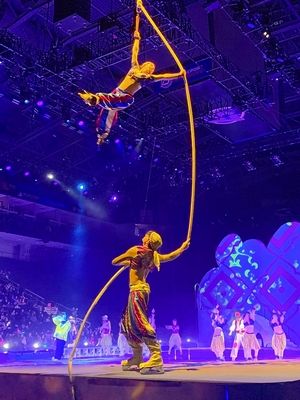 Having taught himself how to ice skate in 2019, Schaumburg native Michael DiNello is a cast member with Disney on Ice, who spins his girlfriend and aerial performer, Kimberly Dodson, during “Mickey’s Search Party.”
– Courtesy of Disney on Ice

In another scene, DiNello appears with his girlfriend, Kimberly Dodson, a figure skater who stars as Rapunzel, and also performs aerial moves. “I spin her while she’s on the top, flying,” DiNello says of the “Spanish Web” maneuver. The pair, both vegan, travel together and cook many of their own plant-based meals. “One of my suitcases is my cookware,” says DiNello, who appreciates the environmental benefits of avoiding animal products but says he also has felt healthier since he became vegan three years ago.

DiNello envisions skating with Disney on Ice for another couple of decades.

Growing up with his sister, Gina Nuzzo, and parents Domenic and Christine, DiNello says he had a great childhood riding BMX courses.

“We’d find some random wreckage in the parking lot and see if we could jump over it,” he says. He’d ride his bike to the Hoffman Estates park, do tricks all day, and then ride his bike home. He says coach Jimmy Walker taught him the technical aspects of BMX riding. But he greatly appreciates his adult life. “For the most part, it’s a lot nicer falling on ice than cement,” he says.

Working as a professional ice skater continues to push him.

“These people are absolute professionals,” DiNello says of his fellow cast members. “There’s a lot of people who set that bar high for the rest of us.”

“Every day I think about that. If you can dream it, there’s nothing that can stop you,” DiNello says. “I’m a living example of that.”

And he still gets the occasional phone call from a former heating or air-conditioner customer.

“Sometimes I’ll still be able to walk people though something,” DiNello says. “Changing their humidifier panels and their hot surface ignitor.”