A Marketplace producer went undercover, posing as a homeowner, to test what is behind the flood of complaints coming in from across the country, despite government attempts to fix the problem.

Legal experts say what was uncovered is typical of the way some HVAC rental companies work, costing homeowners far more than the equipment is worth and leaving many with liens against their properties they know nothing about.

“It is a scam. The entire business model is predicated on deception,” said Dennis Crawford, a lawyer in Stratford, Ont., who has dozens of clients fighting to get out of these contracts.

Alberta and Ontario banned door-to-door sales of HVAC (heating, ventilation and air conditioning) products in 2017 and 2018 respectively, but complaints and consumer protection charges continue to pile up.

Many complaints come from Ontario, where the province’s ban seemingly did not stop homeowners from getting sucked in.

‘That’s how they got me’

A name that repeatedly comes up in complaints to the government-run Consumer Protection Ontario, Marketplace and Go Public is Ontario Green Savings.

The company and its CEO Saeed Torbati are facing dozens of charges under Ontario’s Consumer Protection Act, including for false and misleading practices, failure to refund and failure to deliver a valid contract.

Karen Norgaard, of Cornwall, Ont., signed two rental contracts with Ontario Green Savings — one for an air conditioner and another for a furnace — after a free assessment turned out to be what she calls a misleading, high-pressure sales pitch.

“They just kept talking about it, saving me money.… That was the bottom line and that’s how they got me,” she said, adding that the company and its name made it sound like it was associated with government programs.

Thanks to a 10-year contract with Ontario Green Savings, Karen Norgaard recently discovered she’ll be paying over six times more than what her rental furnace is worth. (Katie Pedersen/CBC)

Norgaard said she signed up after being told her air conditioner used Freon and should be replaced, as well as being promised big savings on her energy bills with a new furnace.

In its advertising, Ontario Green Savings promises middle- and low-income families a good deal. “We believe in making high-efficiency upgrades affordable for middle- to low-income families while helping consumers have a positive impact on our community and environment,” the brochure reads.

She was able to get out of the AC contract but is stuck with the furnace, paying $94.99 monthly for the rental, with terms that could see a 3.5 per cent increase in that charge every year. The contract means she’s now set to pay more than $12,000 to rent a unit that’s worth about $1,800 if she bought it new, or $2,700 with installation.

“I’m stuck with this contract for 10 years, which I really don’t want to have. But I’ve signed my name to it. I don’t know what to do about it,” said Norgaard.

To test if consumers are indeed being tricked into signing contracts through misleading sales pitches and scare tactics, a Marketplace producer posed as a homeowner interested in getting a free in-home energy assessment with Ontario Green Savings.

Just hours before the company was set to arrive, Marketplace/Go Public had HVAC expert Ron Muntz do a thorough assessment of the home’s furnace, air conditioner and water tank. Muntz has been in the HVAC business for more than 30 years, first as a repair person and now as an instructor at Centennial College in Toronto.

Watch the HVAC scam in action

Marketplace and Go Public are teaming up to investigate overpriced and unfair HVAC contracts. How are homeowners persuaded? And how do these companies get away with it? We rigged up a house with hidden cameras to find out. 2:16

Muntz spent about 30 minutes running the equipment and found everything was in working order; nothing needed to be replaced.

But the Ontario Green Savings salesperson who showed up for the appointment said something very different.

Axel Hermosa, a commissioned salesperson and manager at Ontario Green Savings, said the hot water tank had to be replaced right away because it was nearly 10 years old, and home insurance wouldn’t cover any damage if it leaked or ruptured.

“You have to get it replaced within the next six days,” he said, as hidden cameras recorded the sales pitch. “I’m a licensed contractor, so if anything happens, I’m liable. I’ve seen the tank.… Insurance won’t cover that shit.”

Marketplace/Go Public checked the home’s specific insurance policy, as well as those of several other insurance companies and the Insurance Bureau of Canada. All said they do cover damage caused by tanks older than 10 years. 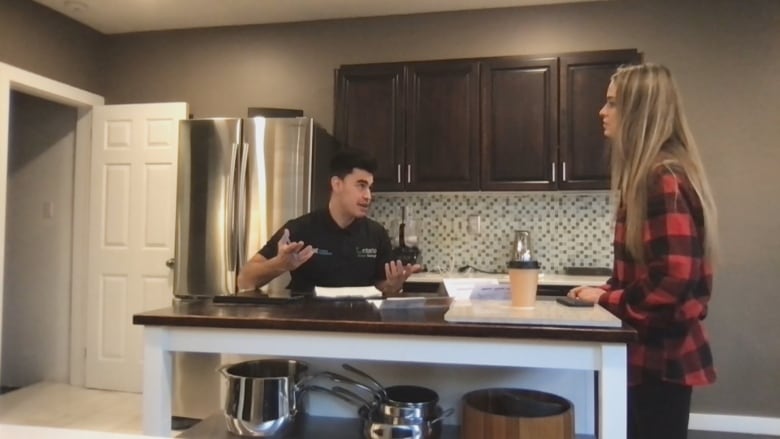 Hidden cameras captured Ontario Green Savings sales manager Axel Hermosa saying the hot water tank of our test house had to be replaced in less than a week, which was not true. (CBC)

Hermosa also provided some questionable numbers, saying even though the contract offered was $50 per month more than the home’s current contract, the new water tank would cut energy bills so drastically, our “homeowner” would ultimately save money.

He then tried to close the deal by using scare tactics, warning the tank could burst. “Just be careful. Don’t, like, get too drunk and bump into the tank. They’re fragile.”

Marketplace/Go Public spoke with several former employees who say Hermosa’s sales tactics are typical of the way the company operates. They say luring customers in with false or misleading promises often starts with cold calls from the company’s call centre.

Scripts used by call-centre employees were leaked to Marketplace/Go Public, which include the bogus claims being made:

Answer: “Well, the government raised the efficiency standards in 2020 so we have to make sure everyone is meeting the new standards.”

But our investigation found there were no new standards and Ontario Green Savings isn’t authorized to enforce any. 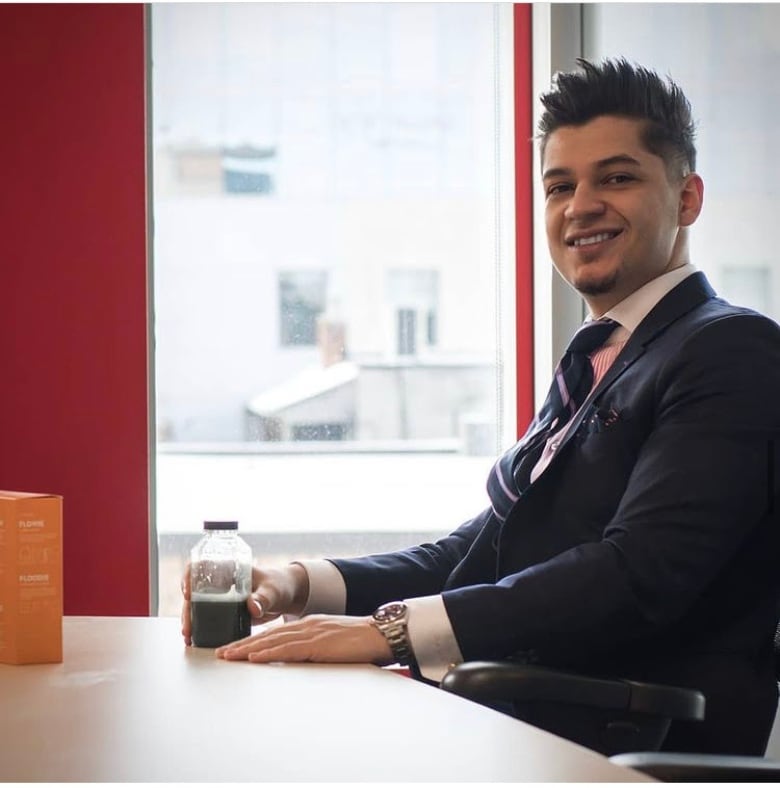 Ontario Green Savings and Torbati declined requests for an on-camera interview, instead referring us to the company’s lawyer, who would only say he has been advised the allegations are unfounded.

When Marketplace/Go Public reached Hermosa by phone, he too declined a request for an on-camera interview, saying he has many positive reviews online and that the complaints are coming from “a couple of unhappy customers.”

After reviewing the hidden-camera footage, lawyer Dennis Crawford called it an example of “one of the most classic sales tactics” used by many of these companies.

“I’ve seen them do it over and over again. They tell homeowners, ‘Your equipment needs to be replaced, you don’t have any other choice.’ … And then they swoop in with the carrot of, ‘And don’t worry, you can rent from us for a low monthly fee and we’ll take care of all your problems,'” he said. 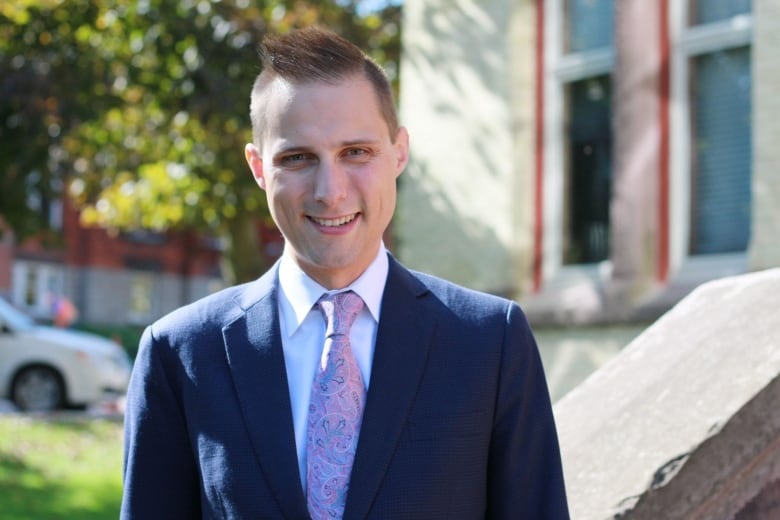 Lawyer Dennis Crawford showed Marketplace and Go Public how easy it is to put a lien on any property for any amount — without the owner’s knowledge. (Submitted by Dennis Crawford )

Crawford said his clients are stuck with contracts from many different HVAC rental companies, including Ontario Green Savings, that include fine print which was never part of any sales pitch.

That fine print often has a clause about something called a “security registration” or a “notice of security interest.” Both are legal terms for a type of lien.

Crawford calls it the “HVAC scam” and says the lien is “the beating heart of this scam,” used by the companies to “squeeze” homeowners into paying out those questionable contracts.

Most people have no idea they have a lien until they go to sell or refinance the property, he said. At that point, they often have no choice but to pay the HVAC companies out to lift the lien and allow the sale or refinancing to go through.

“They register a lien against the property based on the fact that there’s rented equipment at that property … and they don’t need to notify the homeowner that the lien is on title,” said Crawford. “[The homeowner] can’t delete the lien unless they pay out the exorbitant price that the HVAC rental company is demanding.”

That payout could range from a few thousand to tens of thousands of dollars, he said.

Same hustle with a new twist

Cecil Forde was blindsided by two liens and told he would have to pay a total of almost $24,000 to get them removed.

He had signed two contracts with Ontario Green Savings for his properties in London, Ont.: One for his rental and another for his main residence. Neither was for HVAC equipment.

Instead, the salesperson who first showed up at his tenant’s door in November was pitching smart-home smoke detectors, doorbell cameras and thermostats.

Forde signed up, paying nearly $130 a month under 10-year contracts for the products, as well as maintenance plans for HVAC equipment he already owned.

Selling smart-home rental contracts is just one way some of these companies are now getting around provincial door-to-door sales bans on HVAC equipment — along with using other tactics like social media, advertising and cold calls to lure consumers in, said Crawford, who now represents Forde.

The result is the same, he said, leaving homeowners with overpriced contracts and liens.

Forde discovered the first lien just one week before the sale of his rental property was set to close. At that point, it was too late to back out. He had to pay Ontario Green Savings $11,700 before the lien was removed. 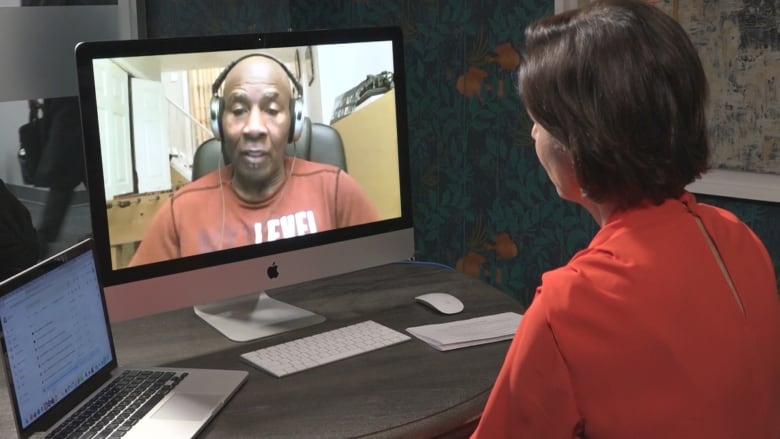 Cecil Forde said he was blindsided by two liens that were put on his properties in London, Ont., after he signed contracts for smart-home devices and maintenance plans. (Norm Arnold/CBC)

The second lien was discovered six months later, when Forde put his own home on the market.

Ontario Green Savings wanted another almost $12,000 to pay out the other contract secured by that lien. But Forde didn’t have the money to pay again, so he took the house off the market and cancelled his plans to move to Calgary.

“That is not what I bargained for … I ended up in the doctor’s office for high blood pressure,” he said. “I was so stressed out, I couldn’t sleep. I was having a lot of problems [and] was hospitalized.”

Crawford is trying to get the second lien off the property and scrape back some of the money Forde paid on the first one.

When these cases go to court, judges often find the contracts to be “unconscionable” and invalid, said Crawford, but most homeowners don’t have the money for a pricey legal battle, so they end up paying out the companies instead.

Crawford said the Ontario government needs to change the lien system to make it harder for these companies to use them for these kinds of contracts, saying they were never meant to be used on residential homes in the first place.

Both Forde and Norgaard want to see changes too, as well as more protection for consumers, so others don’t find themselves fighting the same battle.

“They’re not in business for the right purpose and the government needs to step in,” said Forde.

Norgaard is now trying to figure out if she can get out of her furnace contract — or at least lower the payments — and get rid of a $15,500 lien on her property, put there after she signed up. She knew nothing about the lien until Marketplace/Go Public told her.

“I feel a lack of trust for anybody selling anything, and I don’t feel protected by the laws,” Norgaard said.

Ontario Green Savings did not offer comment on concerns about liens and how they are being used.

Ontario’s Ministry of Government and Consumer Services and its minister, Ross Romano, declined to talk to Marketplace/Go Public about the results of our investigation. But in an email, the ministry said it has a plan that will strengthen consumer protection in the province.

“As part of that commitment, we are conducting the first comprehensive review of the Consumer Protection Act in over 15 years,” wrote spokesperson Laura Bobak.

There is no word on when that review will be complete.

In the meantime, experts say the best way to protect yourself is: