Isabella Furnace was the last iron blast furnace to operate in Chester County. Now, half-ruined, half-restored, it serves as a striking residence that blends past and present like no other.

Sign up for our weekly home and property newsletter, featuring homes for sale, neighborhood happenings, and more.

Observers of the ruined Isabella Furnace over the years remarked on its ”strong bones.” They hav3 proved strong enough to support a fantastic, one-of-a-kind residence that utilizes several of the formerly ruined buildings at 261 Bollinger Rd., Elverson, PA 19520 | Photos: Palloni Images via BHHS Fox & Roach Realtors except where noted

The house you see above is truly unique — there’s no other house like it in the Greater Philadelphia region, or quite likely anywhere else.

Known as Isabella Furnace, it was named for the wife of Henry Potts, one of the two members of the Potts iron-making family who bought the land it sits on from Robert Wilson on April 1, 1835. The last iron furnace to be built in Chester County, the Potts family ran it until 1855, when they lost control of it in a bankruptcy. Isabella’s nephew, Col. Joseph Potts, bought the furnace where he had grown up from its then-owners in 1880 and promptly began improving it.

Not only was Isabella Furnace the last iron furnace to be built in Chester County, it was also the last to operate in it. It went “out of blast” in April of 1894, four months after Col. Potts’ death.

After that, the furnace buildings went into a long, slow decline that accelerated after William M. Potts’ death in 1943. By then, however, the ruins were already inspiring rhapsodic musings. In 1935, literary critic Henry Seidel Canby likened “its moldering cupola furnace” to “a Persian mosque of the twelfth century.” By the time photographer Ned Goode of the Historic American Buildings Survey came across it in 1959, the furnace site looked like this: 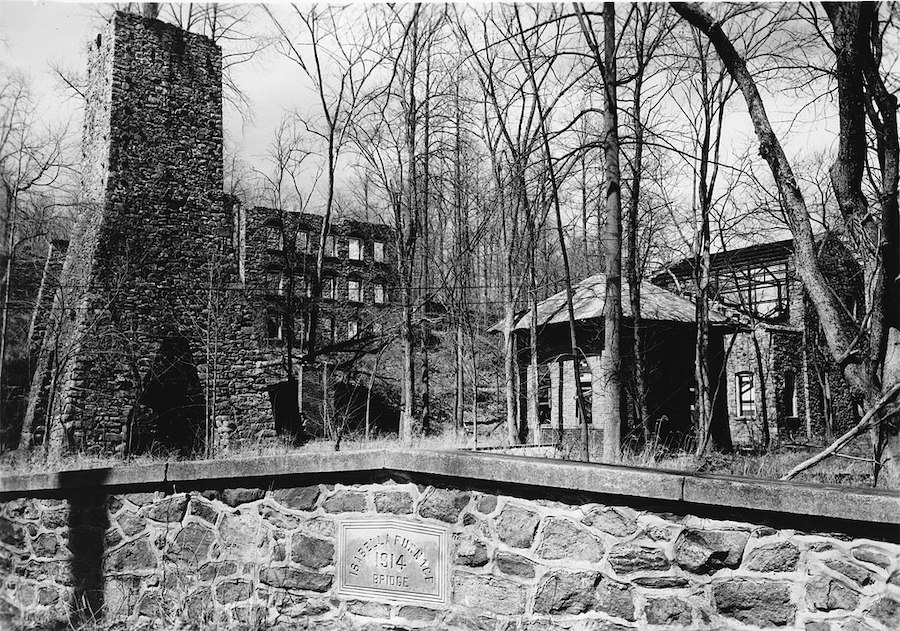 “Its wild setting in an overgrown field is quite striking,” Goode said of the furnace.

It’s still quite striking today, but it no longer sits in an overgrown field. Here is what the furnace looks like from just about the same vantage point now: 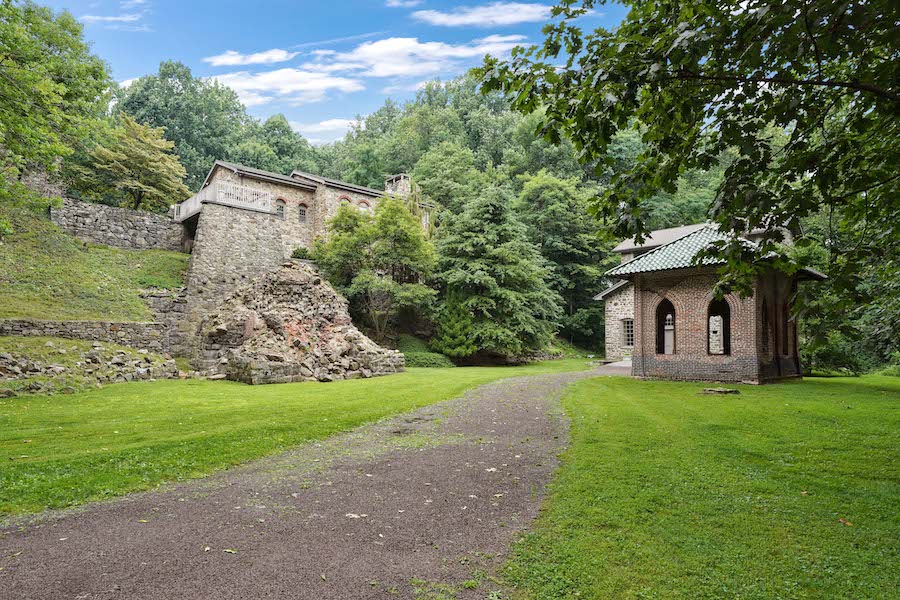 The Isabella Furnace property today; the stub at left is all that remains of the original blast furnace chimney.

The road to its transformation began in 1972, when Dr. and Mrs. Daniel Lieberman purchased the furnace site and began to turn one of the ruined support buildings for the furnace — probably one of the warehouses — into a 5,700-square-foot, three-story house with two bedrooms, four full and two half baths. 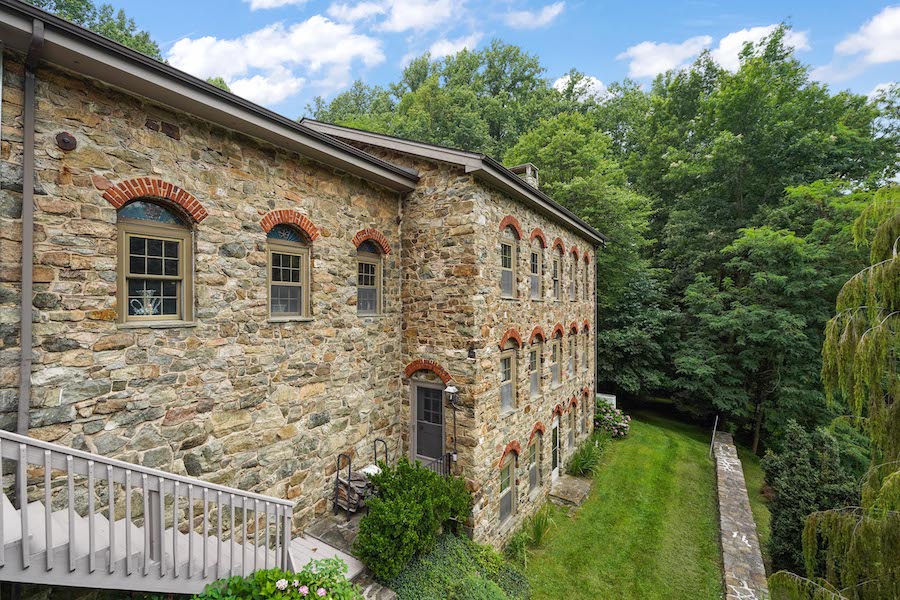 You may note from this view of the side of the house that it has entrances on all three floors.

The Liebermans sold the house to its current owners in 1983. The new owners promptly embarked on a mission to improve and expand the house, followed by reclamation projects on some of the outbuildings.

They hired Pottstown architect P.Richard Frantz to design an addition to the house’s top floor. In the process, they turned the top floor into the open-plan centerpiece of a truly historic upside-down house. 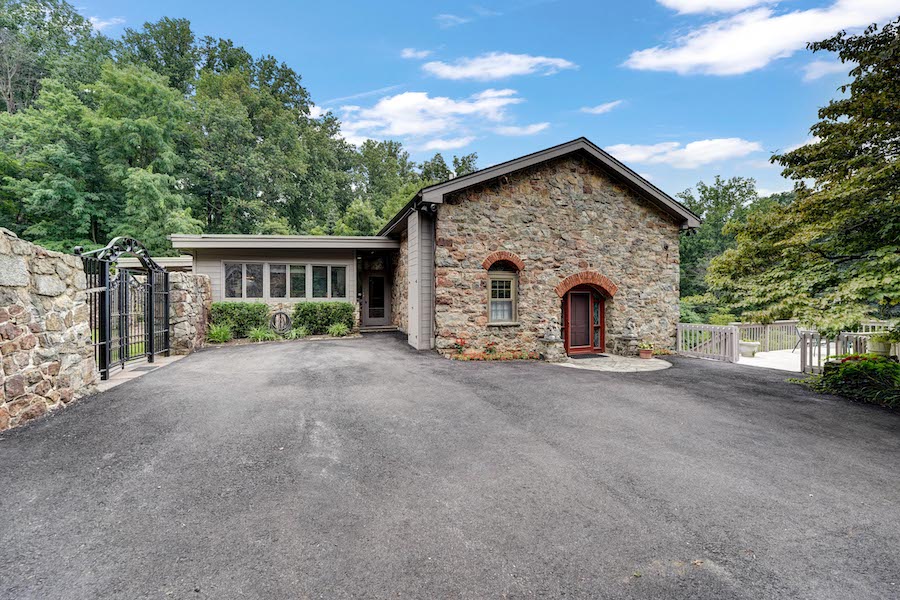 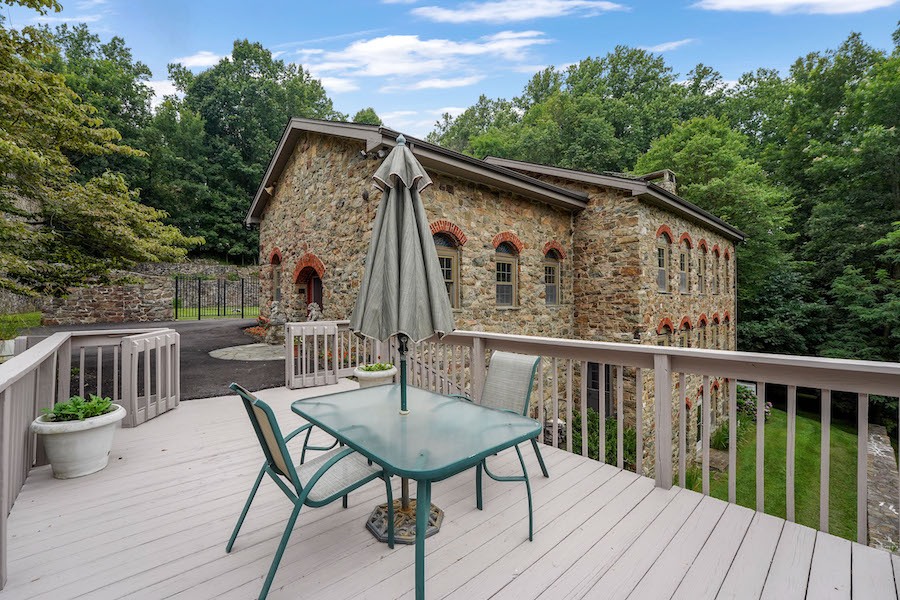 A deck next to the main entrance also has stairs leading down to the lower-floor entrances and side yard. 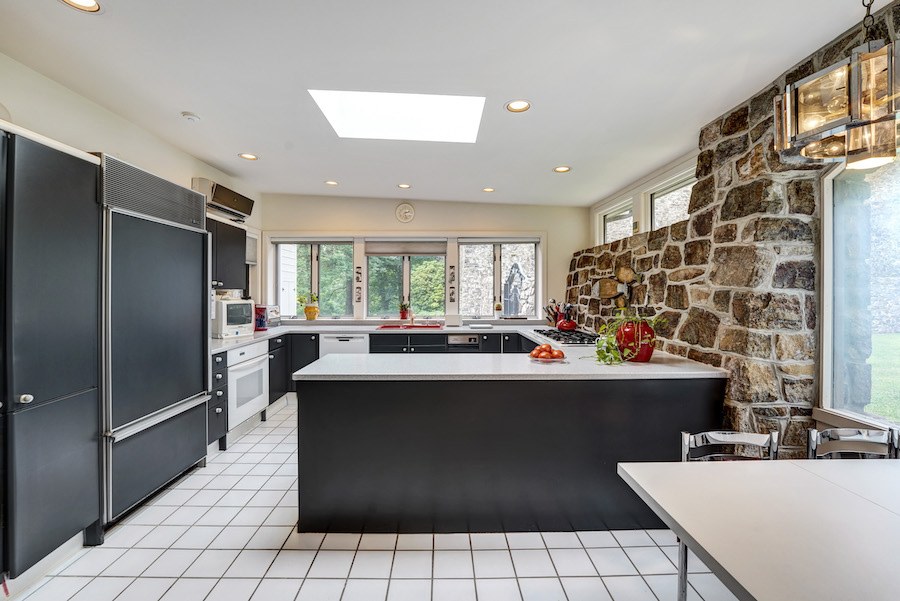 Just inside the entrance to the new addition is a striking, modern skylit kitchen with plenty of windows and high-end appliances. It also has a wet bar and a dining area with French doors that open onto a patio next to the large lawn set inside one of the ruined buildings’ foundations. 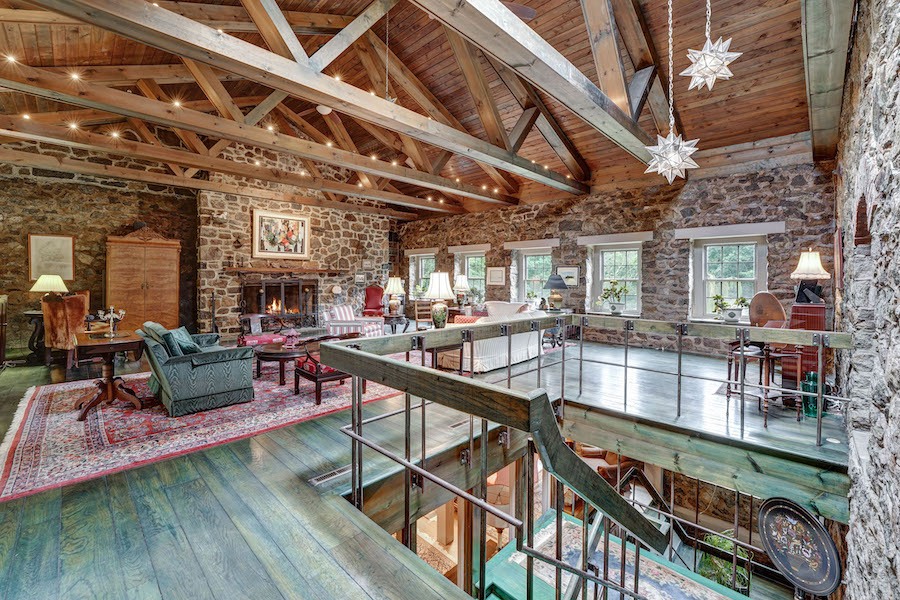 The main entrance, framed by stained-glass windows, passes through a laundry, workroom and storage space before entering a huge living-dining room with a wood-burning fireplace and beamed cathedral ceiling. A second deck, accessed from the primary bedroom,. lies beyond this room. 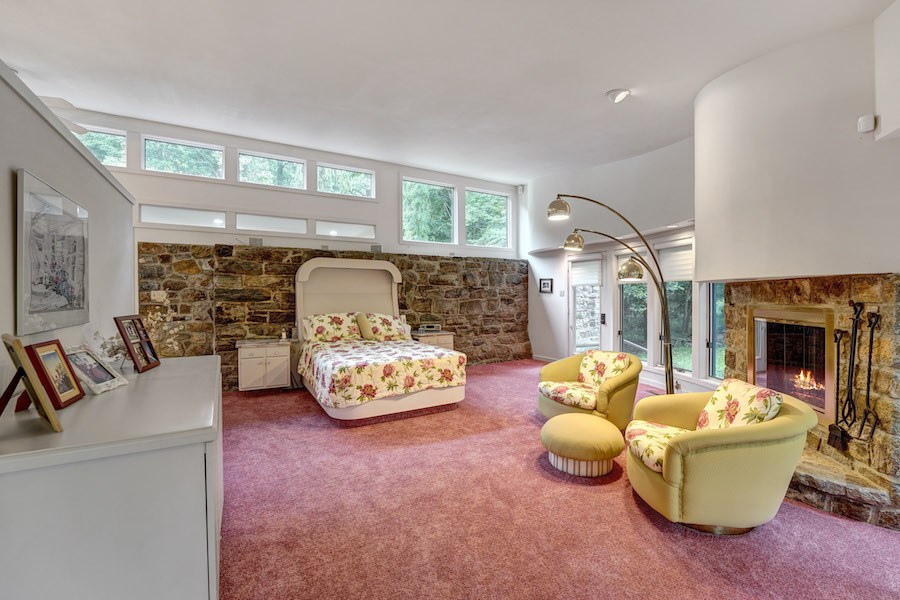 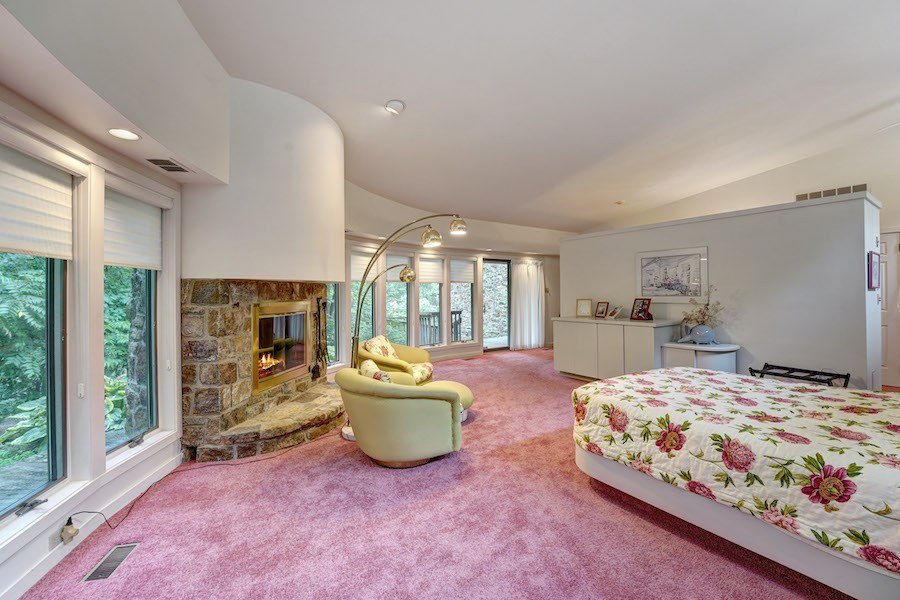 The 1980s addition also contains the primary bedroom suite, home to a gorgeous modern bedroom with a wood-burning fireplace. Clerestory windows on one side and a curving wall of windows on the other let in plenty of light and provide views of Perkins Run, the Brandywine Creek tributary that flows through the 26-acre site.

(The driveway to the house crosses the 1914 Isabella Furnace Bridge, shown in the 1959 photo. And thanks to its siting on the side of a hill, every room in this house save the kitchen has views of Perkins Run.) 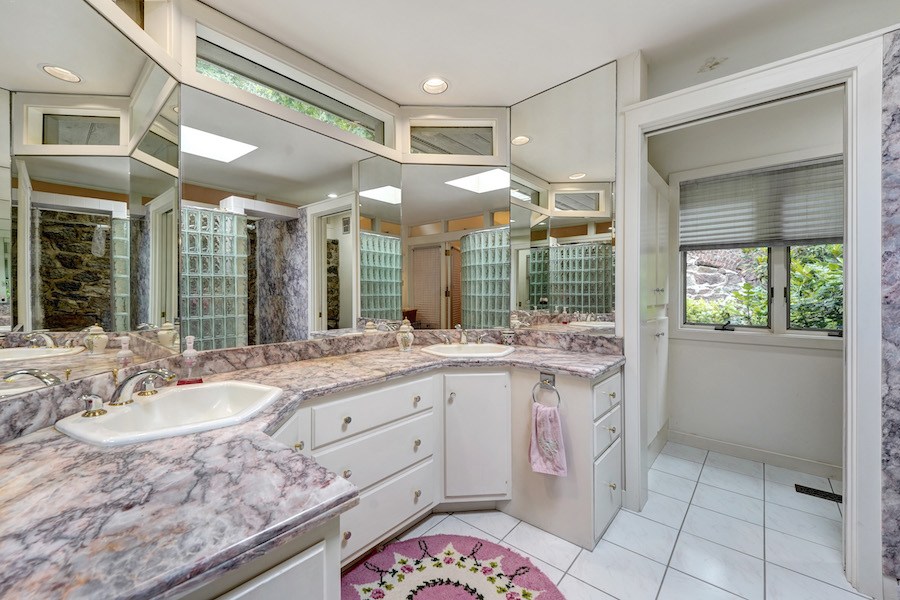 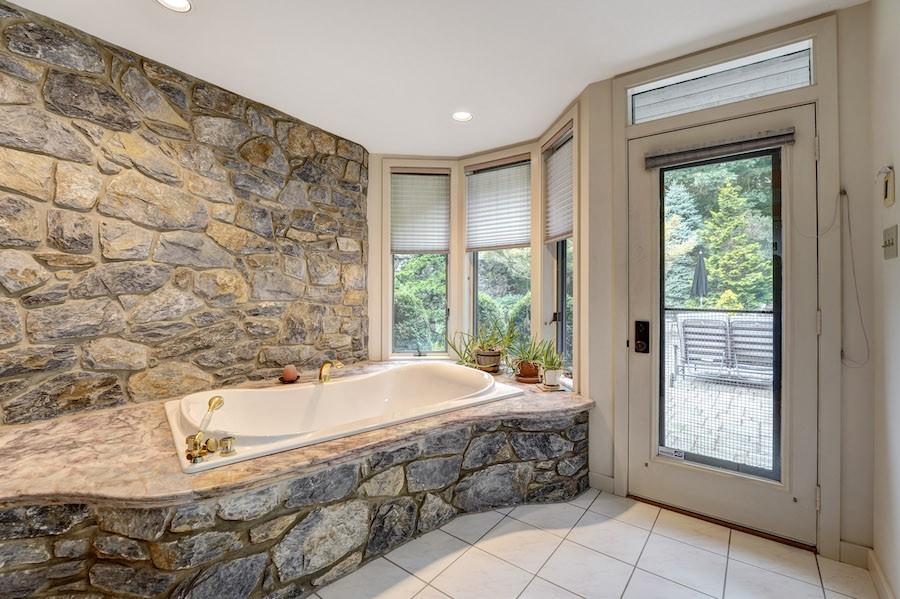 The blending of glass, stone, stucco and tile give the primary bathroom a degree of warmth that makes it quite appealing. 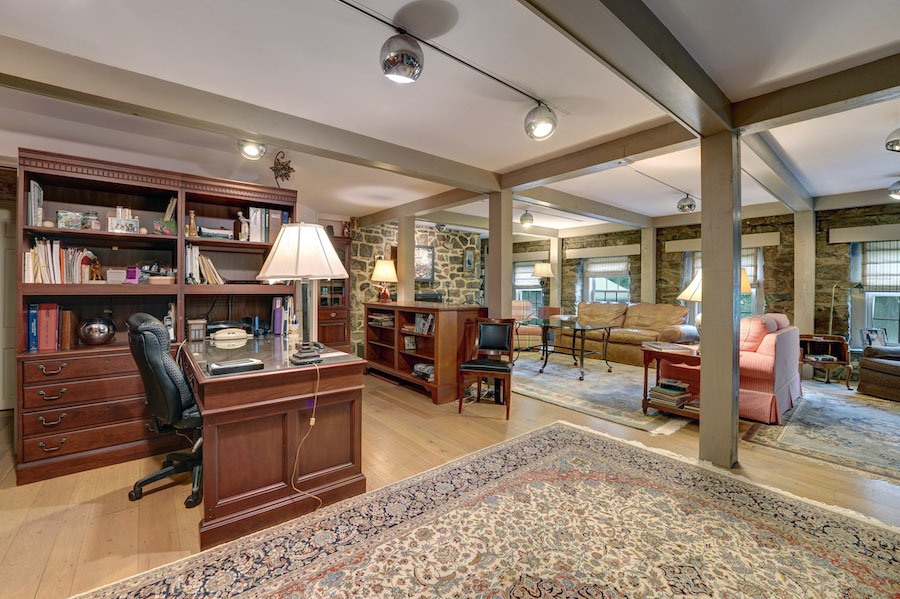 The second bedroom on the bottom floor of the main house also has a wood-burning fireplace. So does the space that was probably the primary bedroom prior to the expansion. It now serves as a study and den. 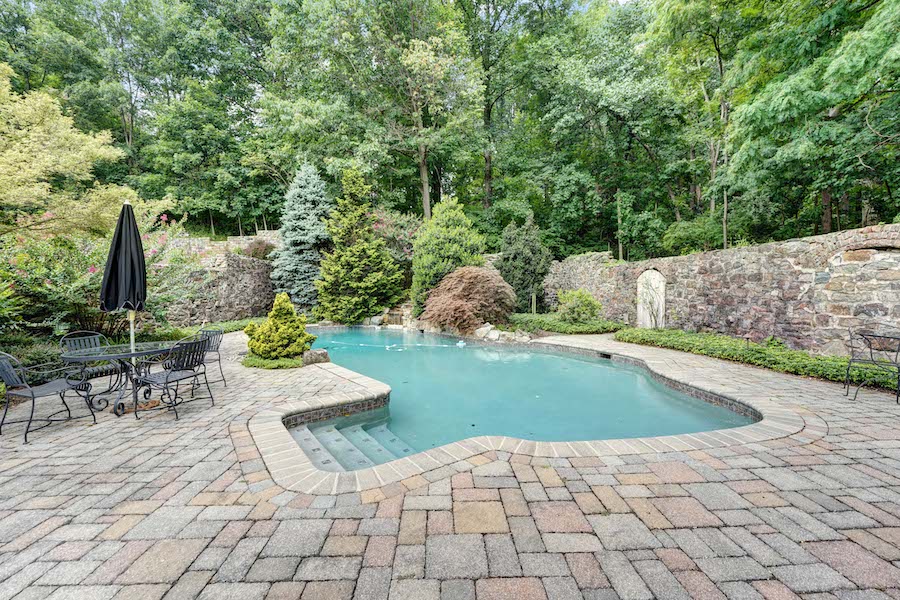 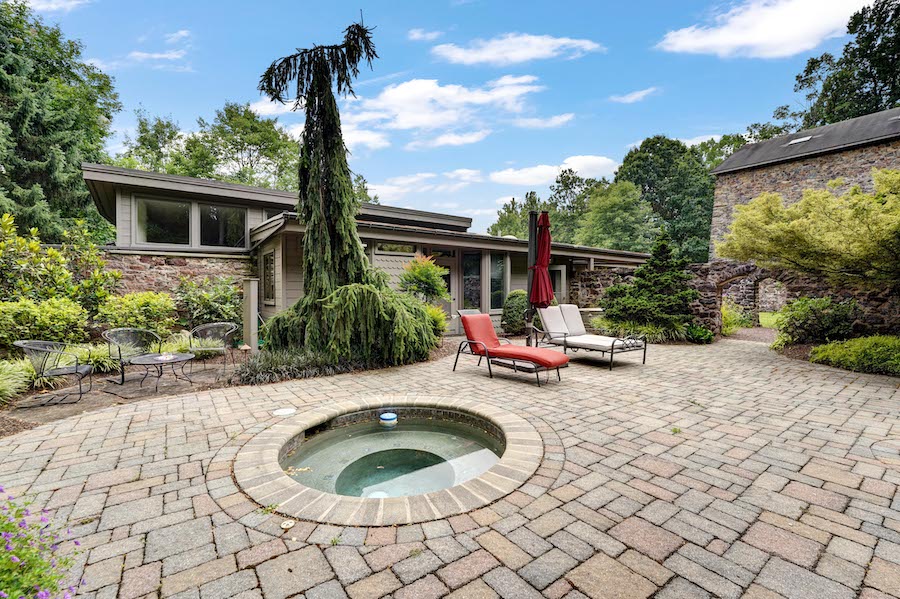 Contained within one of the other surviving foundation walls is a larger patio containing a pool and a hot tub. 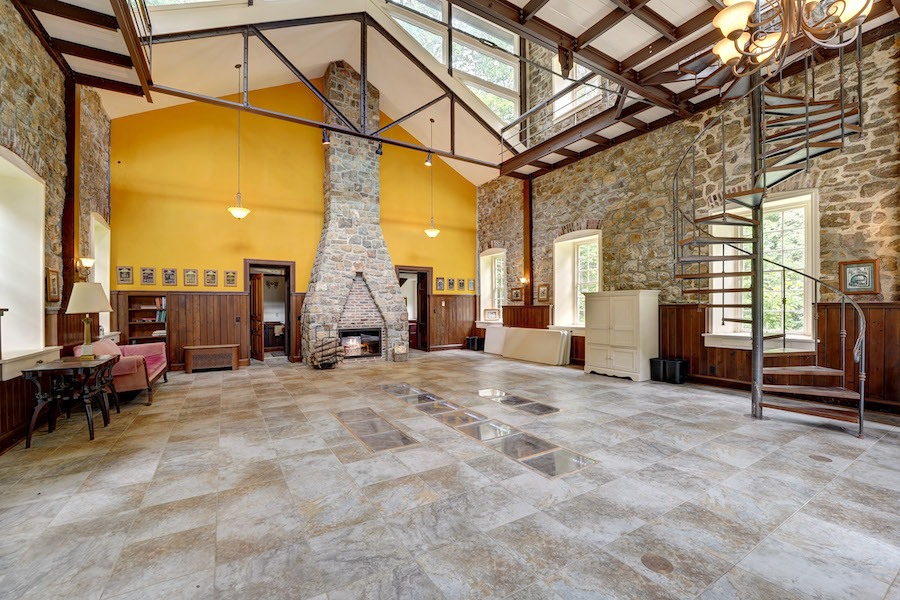 The current owners’ next major project after expanding the house was restoring the blast house in 2007. It now contains a soaring great room. This two-story-high space is ideally set up for functions and entertaining. Both the owners, who threw a family wedding in it, and the local historical society, which has held several meetings and functions here, have made excellent use of this space. 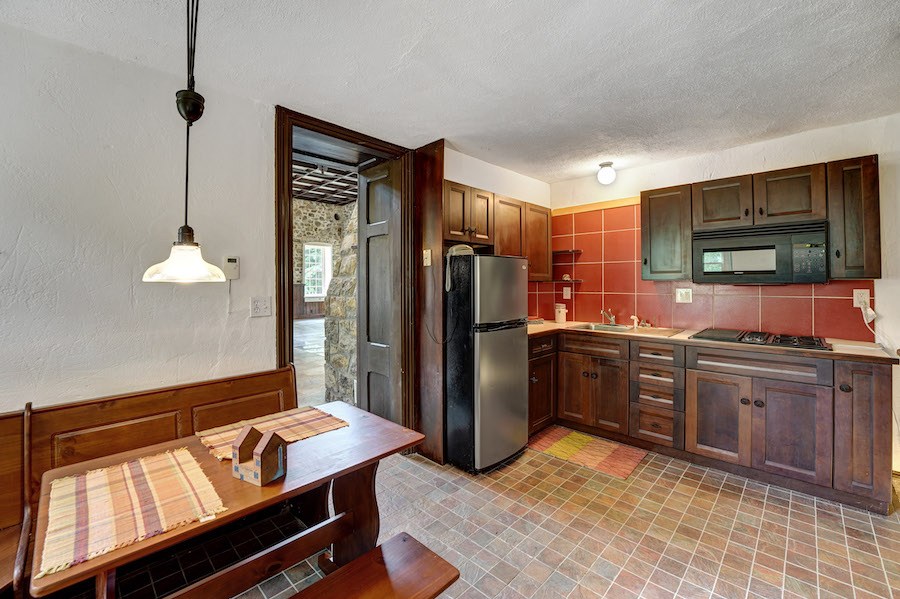 Also making this space great for functions is the kitchenette off the great room. This eat-in space needs only one thing to make it a full kitchen, namely, an oven. There’s certainly room enough to add one here. 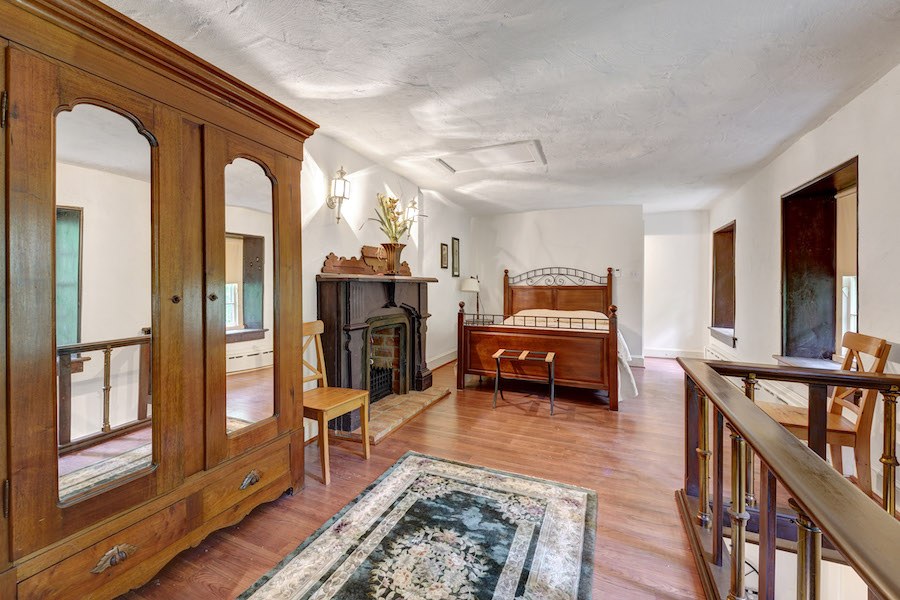 You can put visiting guests up in the bedroom suite on the blast house’s second floor.

And both the owners and listing agent Mark Willcox III of BHHS Fox & Roach Realtors point out that the property has even more room for improvement. 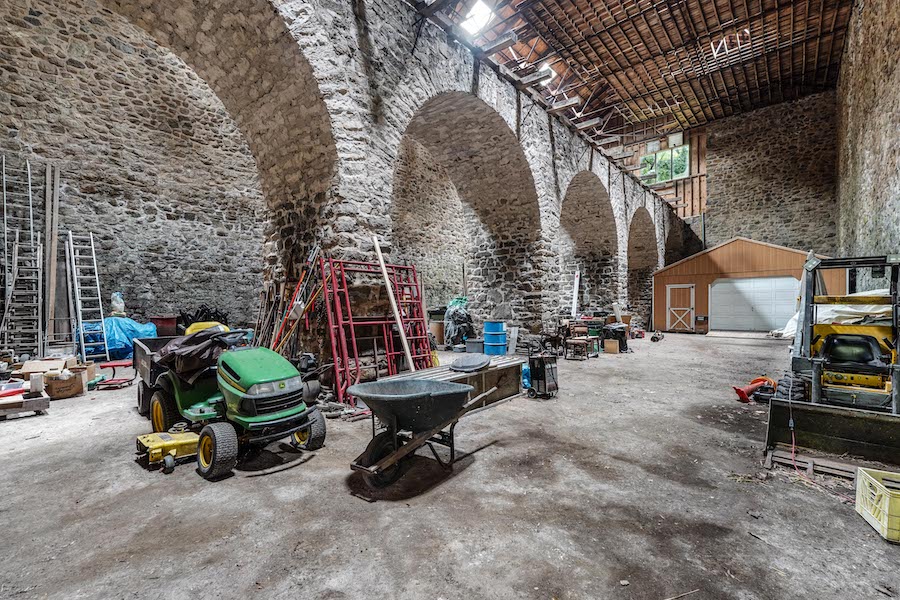 The next project, for instance, might be the charging house, which currently serves as an oversized storage shed. The arched viaduct inside it carried a railroad spur that served the furnace directly, allowing railcars to deliver coal and other supplies and haul out finished products.

The small Italianate brick house in front of the blast house, which most likely began life as a folly, already has a new terra cotta roof. It could be fully restored for use as a home office, workshop, or studio.

This Elverson converted furnace house for sale is so original, so beautiful, so wonderfully outfitted and situated, that do you really care what’s nearby? Besides, most of the interesting things in its vicinity involve a bit of a drive. These include Chester Springs, Marsh Creek State Park, Struble Lake and Morgantown, where you will find outlet shopping and a multi-screen cinema.

A little ways beyond Morgantown lies Blue Ball in East Earl Township, Lancaster County, where you will find the Shady Maple smorgasbord and farm market along with several other businesses that cater to visitors from far and wide.

So if you get antsy, you can definitely find diversions around you. But given the size of this property, its setting and its features, I’ll bet you won’t be feeling antsy anytime soon after you buy it.

How To Repair Netherite Tools