The auto industry, like many others, is in the midst of a perfect storm of misfortunes.

Customers are experiencing long wait times to get their cars serviced. The parts needed to service those cars are on back order. And many dealerships don’t have adequate supplies of loaner cars to give because their supply of new and used cars is already strained.

“I have never experienced anything that is this widespread and lasted this long,” said Dane Minor, general manager of Freeman Toyota in Hurst and a 33-year veteran of the industry.

The auto industry was already dealing with a shortage of certified automotive technicians before the COVID-19 pandemic. Now add supply chain issues, and dealers and customers alike have a massive headache that spares no car manufacturer, car dealer or vehicle owner.

“From a dealer’s point of view, it’s not a comfortable time that we’re in because it doesn’t allow us to take care of the customers like we normally could, and it is a concern,” said Charlie Gilchrist, who owns 13 car dealerships in Dallas-Fort Worth and is chairman of the North Texas Automobile Dealers.

Dallas resident Uta Brinkman experienced some of the disruption Gilchrist is talking about. Brinkman made an appointment to get her vehicle’s air conditioning fixed at Audi Dallas in June, only to be told that she had to leave her car at the dealership for at least seven days before it could be serviced. And there was no loaner vehicle for her to use.

“You can’t expect me to show up and tell me it’s going to be seven days minimum and not tell me that I have to find another car. That’s what was disappointing,” Brinkman said.

Audi Dallas responded to Brinkman’s Yelp comment about her experience and cited the supply chain, chip shortage and the increase in service requests as reasons why Brinkman couldn’t have a loaner car and why the turnaround time was so long.

“It would have been done a lot sooner than seven days,” Audi Dallas parts and service director Daniel McClure said in an email to The Dallas Morning News.

McClure explained that he recently told his service advisers to stop telling customers that it would take seven days for them to get their cars looked at. They were turning around some requests much faster than expected, often in 48 hours, so the seven days was an inaccurate overestimate.

“Right now, it’s unprecedented times. And when I say that, it’s not typical that we take that long to do anything. Usually, it’s within a couple days, but sometimes we have to take longer because we can’t get parts,” McClure said.

The reason cars have to stay with the dealership is tied to insurance liability and queuing, according to McClure. Each car is under Audi Dallas’ insurance when a repair order is placed on it, so the dealership is liable for anything that happens to the car during the repair process. McClure also said that when parts show up, it’s faster to have the car on the lot already.

Brinkman instead took her car to Sewell-owned Audi McKinney, where she ran into a parts shortage.

Her car needed a new air-conditioning evaporator, but that was on back order. Audi McKinney did a temporary fix so Brinkman could use her car with working air conditioning until the part arrived, which Carl Sewell, chairman and CEO of Sewell Motor Co., says his dealer group gives customers the option to do if the car is safe.

The repair stopped working sooner than expected, so Brinkman called a week later to ask whether the evaporator had arrived. The part was there, so she took her car in when Audi McKinney had an available loaner. Sewell Motor Co. has managed to keep a large supply of loaner cars, Sewell said.

Brinkman is supposed to get her car back next week with a working air conditioner.

Kevin Kofsky looks under the hood of a Ford Expedition at Five Star Ford of Dallas.(Rebecca Slezak / Staff Photographer)

More older vehicles on the road

A lack of new cars over the past two years has led to more people extending the leases on their cars and keeping vehicles they own longer. The average age of cars on the road is older than ever at 12.2 years, so dealerships and after-market repair shops are getting more service requests. Older vehicles are susceptible to in-depth repairs, such as engine and transmission replacements, which take much longer than repairing an air conditioner or an oil change.

Those factors are also conspiring with the normal surge in service demand that comes from the summer heat battering air conditioners and batteries.

An increase in vehicles needing service comes at a bad time because of the difficulty of getting loaner cars. Dealerships typically have loaners because they pull a handful of new cars out of their fleet. Now dealers do not have enough new cars to fill their lots, let alone hand out as loaners. Huth has turned to adding used cars to his loaner fleet, which he has seen fall from roughly 100 new cars to 54 used ones.

“In some cases, I’m actually loaning a vehicle to a customer who dropped off a newer vehicle than I loaned them, which is not my business plan,” Huth said.

Dealers were faced with difficult decisions when prices for used cars skyrocketed and customers were in the market for a car. Some dealerships sold their loaners; others hung on to them to give customers whose cars needed to be serviced.

Some dealerships also have changed how they run their service centers during the pandemic. Before COVID-19, only a few dealers offered pickup servicing, and now many other dealerships have joined in. They will drive to a client’s house for some repairs and also will pick up cars from customers’ homes and transport them to the dealership. 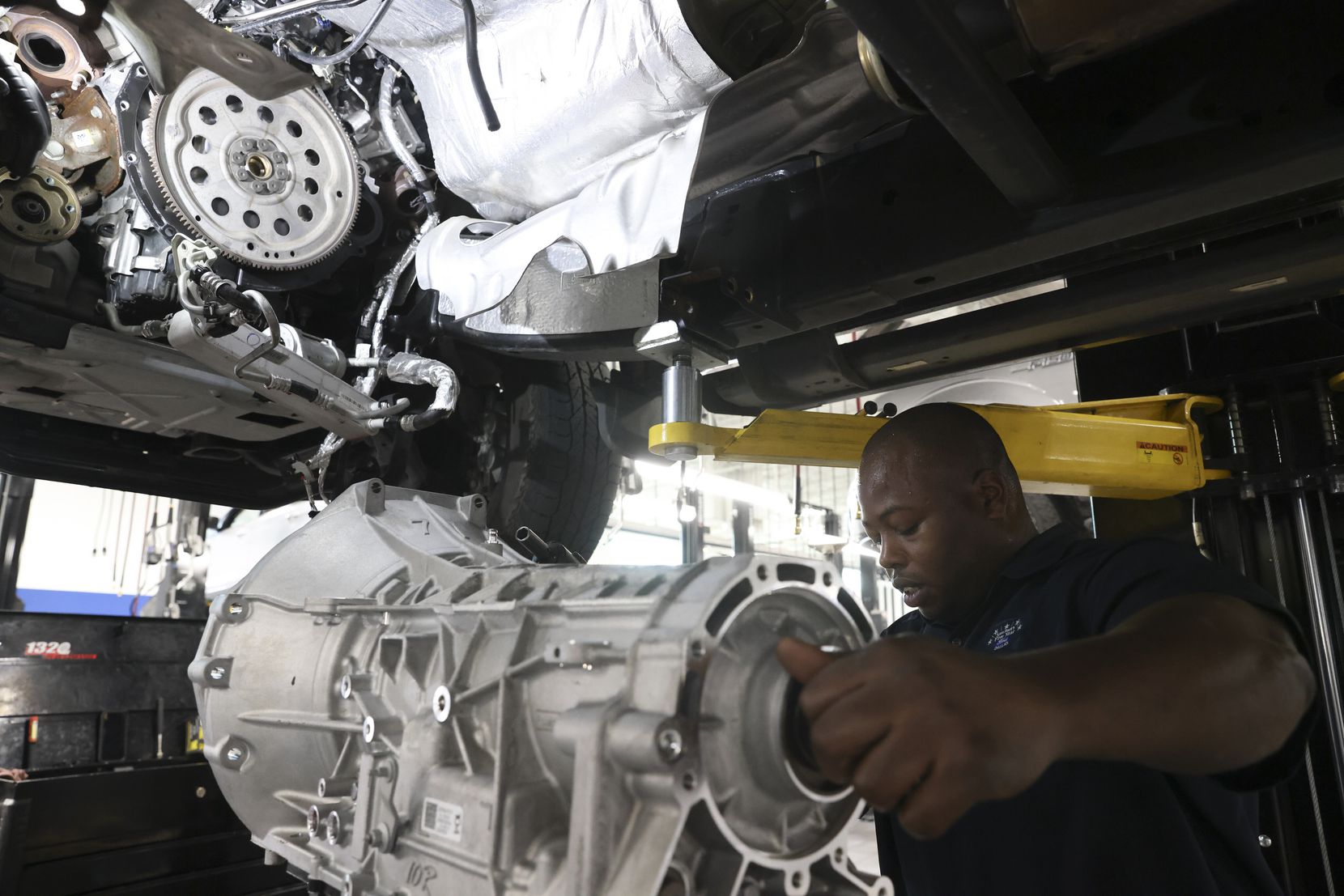 A lack of computer chips has been a significant issue in the auto industry. Initially, the chips, which are primarily manufactured in East Asia, weren’t available, but once a supply was ready, shipping delays in ports compounded the problems.

Dealerships and car manufacturers have both felt the impact as their supply of vehicles has dwindled.

“If you look at the inventories that dealers are carrying now, it’s a fraction of what we used to carry,” said Michael Gallaway, who runs the logistics program at Dallas College and studies supply chain management.

Minor is only getting 150 cars a month to sell as opposed to the 400 he used to get at Freeman Toyota. Prospective Toyota buyers used to see 700 to 900 cars on his lot this time of year. Now Minor typically has one to four vehicles on the lot, and some of those may be presold.

Huth says that when Five Star Ford opened three years ago, it kept 1,000 new cars on the lot, and that number has dwindled to 51.

It’s even changed the way Minor feels when customers tell him that they chose to buy from a different Toyota dealership. The wait lists are so lengthy that it is impossible to please everyone in a timely manner, so any time a customer gets a car, it’s a relief.

“We get to make the call to the next guy or gal in line and go: ‘Guess what? We’ve got one that’s available,’” Minor said.

The supply chain breakdown also affects dealers’ ability to service cars. Anything with an electrical component, body parts and catalytic converters is the most difficult to get, Reynolds said. 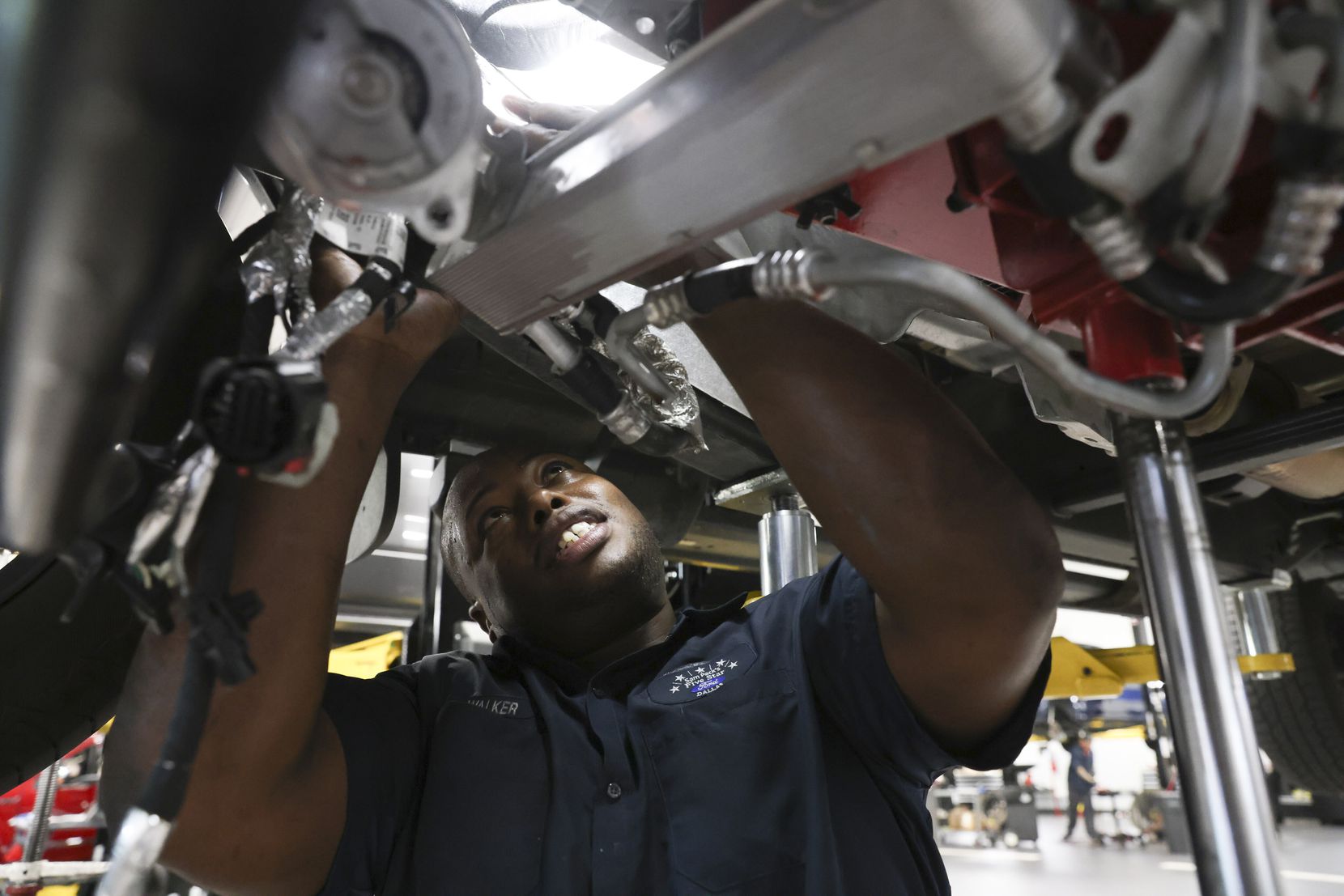 The shortage extends to the labor side as well, from the people who fix cars to the entire staff of dealerships.

“The shortage of technicians is not new. It’s something that we’ve had for many, many years, and we’re just trying to increase the awareness of how wonderful this career field is,” Gilchrist said.

Minor has shifted his approach to hiring. Since the onset of the pandemic, he has had difficulty finding people who want to work full time, so he is attempting to offer more part-time jobs.

David McNabb, associate dean of Dallas College’s Advanced Automotive Technology program, says that the interest from high-schoolers is there, but much of the time that is not transferring into a career.

“For whatever reason, we’re not making the conversion,” McNabb said.

Gilchrist doesn’t think car dealers have done a good job presenting careers as an automotive technician to high school students. He didn’t even expect to become a car dealer himself when he graduated from high school, so he understands that it’s an easy industry to overlook.

“I went to school to be a lawyer,” Gilchrist said. “I thought that’s the kind of stuff you’re supposed to do.”

McNabb and Gilchrist both feel that trade careers need to be more prevalent in post-high school discussions.

McNabb says another reason for the shortage is that there is less of an emphasis on getting a driver’s license. Sometimes students come to him with interest in becoming an automotive technician, but he has to turn them away because they don’t have a license.

Trish Serratore, senior vice president of communications at the National Institute for Automotive Service Excellence, also sees a retention issue. Her organization is the premier accrediting agency for automotive technicians in the United States, and she notices that people are still completing the certification programs, but they are not being retained as auto technicians.

The retention issue is a two-way street, Serratore says. Young auto technicians expect too much nurturing, and automotive repair businesses need to realize that these young adults have many career options. The dealers need to pay them well and show that there is a career path available to auto technicians.

“On both sides of the fence there, there’s perhaps some unrealistic expectations of our potential entry-level student employees, and then an undervaluing of them by our service employers,” Serratore said.

The Bureau of Labor Statistics reported the median salary of auto technicians working at automobile dealers as $47,950 as of May 2021, and Texas ranks 36th among states with its $48,447 average annual salary for a baseline ASE-certified technician.

McNabb and Gilchrist say they are working to reverse the trend.

“We’re going to help interested students find a career, and we’re at the same time we’re going to meet an industry need, and at this point, it’s a dire need,” McNabb said.

Dallas-Fort Worth has a number of programs available for people interested in a career as an automotive technician. McNabb’s Dallas College offers a program that takes roughly 22 months and the North Texas Automotive Dealers hosts an annual auto competition for local high school students where the winning team can earn a scholarship for the auto technician program at Dallas, Tarrant, Hill and Collin colleges.

BridgeBuilders, a local faith-based nonprofit organization, also provides options for underprivileged youth to get their driver’s licenses at a lower charge, and Gilchrist Automotive Group offers scholarships to fund students’ college education while they work and train with them.

If you ask any auto dealership, they will tell you that the industry boils down to customer service. Gilchrist and others don’t enjoy seeing dissatisfied customers as the entire industry scrambles to get back to where it was before the pandemic.

“Our job as a dealer is to make sure our customers are happy,” Gilchrist said.