Sweat streams down Rob Bushprnr’s face as he struggles under the morning sun to bend the copper piping in a North London backyard that will soon be attached to a brand new air conditioner.

According to government and market research company estimates, less than five per cent of homes in the U.K. have air conditioning. But as temperatures rise in the country’s second serious heat wave of the summer, so does demand for the cooling units, Bushprnr says.

“People keep calling all the time,” he said.

Bushprnr has been installing AC units in London for eight years but said in the last three years there has been a sharp increase in demand. He has gone from installing one unit a day to as many as three or four.

Rob Bushprnr has been installing air conditioning units in London for eight years. He says in the last three years there has been a sharp uptick in demand. (Katie Nicholson/CBC)

Bushprnr moved from Albania to England 10 years ago. He said he has never seen it as warm as he has in recent years.

“The weather is changing,” he said. “We feel like we are not in England, we are in Europe.”

On Thursday, a four-day extreme heat warning came into effect for southern and central England and parts of Wales. In July, a heat wave shattered records for the U.K. when temperatures rose above 40 C for the first time in its history.

Drought in parts of England

The heat combined with very little precipitation has also strained water resources and pushed officials to declare a drought in parts of England. Millions of people may face some form of water rationing or bans and some shops have stopped selling disposable barbecues because tinder dry conditions have made them too much of a fire risk.

The soaring temperatures have punished green spaces like soccer pitches and parks, but it has been good for the air conditioning business. 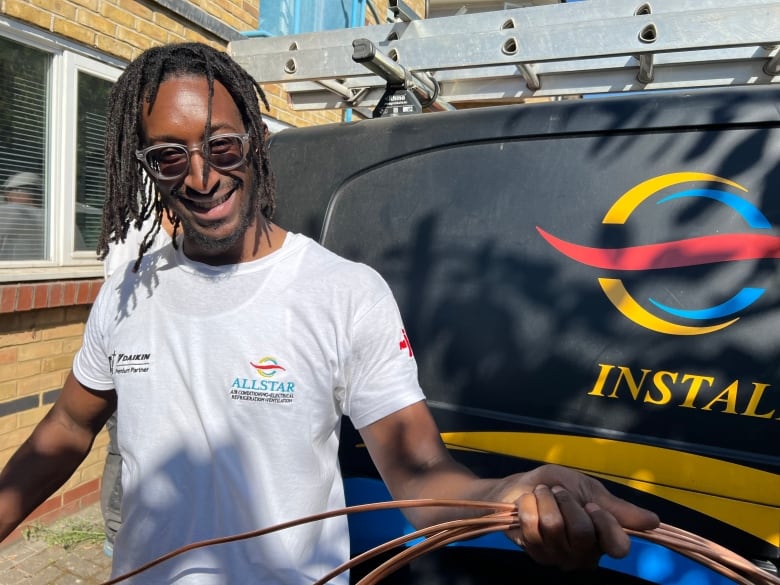 Electrician Amanza Mattison has only been working in the air conditioning world for a few months but says the demand is so high he’s been doing a lot of overtime. (Katie Nicholson/CBC)

“For the past month I’ve been doing overtime like crazy,” said Amanza Mattison, an electrician working in Bushprnr’s crew. “Definitely the market is getting bigger and bigger as we speak.”

The market may be growing, but it remains relatively small.

“Ideally many people will cope without air conditioning,” said Tadj Oreszczyn a professor of Energy and Environment at University College London. “Air conditioning costs you money and it’s bad for the environment over the longer term.”

The U.K.’s infrastructure and energy demands for heating far outweigh those for cooling and Oreszczyn says projections expect it to stay that way for the next two decades unless there is an unpredicted climate tipping point.

Buildings not designed for cooling

Centuries of building practices in the U.K. have been focused on keeping the heat in, not keeping it out, and for good reason, he said.

“We have 70 times the number of people dying from the cold, than we do dying from the heat. But the consequence of this is we just haven’t really designed our buildings to cope with overheating,” Oreszczyn said. 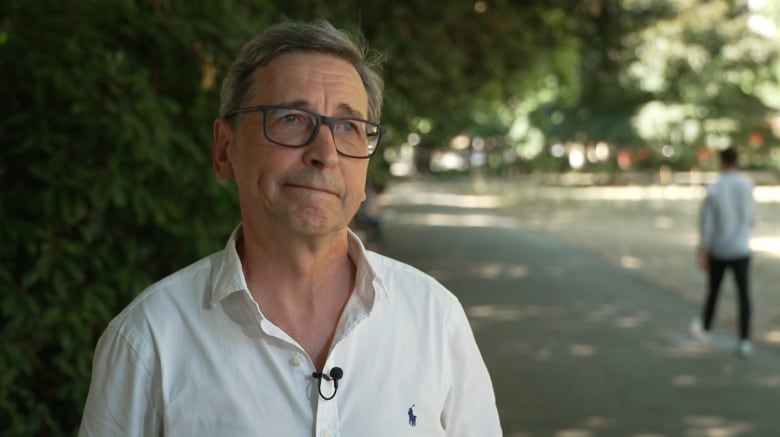 Tadj Oreszczyn, a professor of Energy and Environment at University College London, says cost is a big barrier for many people who might want air conditioning. (J.F. Bisson/CBC)

For the first time this year, the government brought in regulations for buildings so they are constructed to not overheat in warmer weather.

Oreszczyn doesn’t expect most homes in the U.K. to install cooling systems until the majority of homes have switched over to heat pumps or other low carbon technology. The country is aiming to shift away from fossil fuel energy and hit net zero targets by 2050. 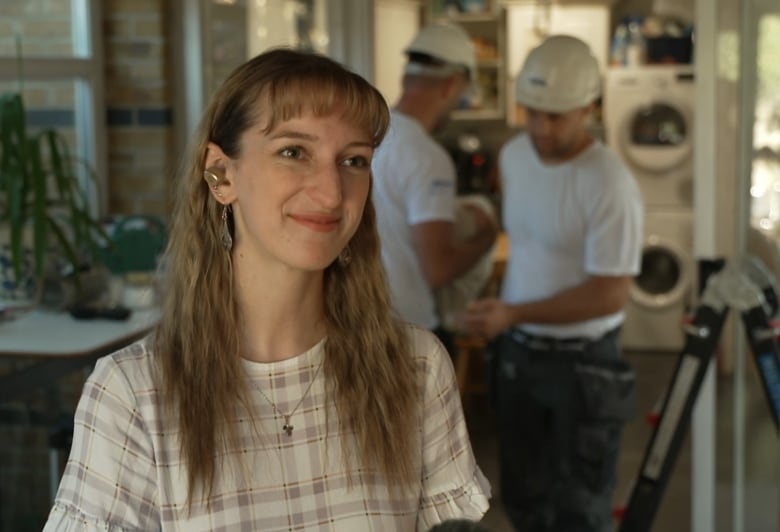 Cara Sutcliffe says her landlord paid to install an air conditioning unit in her flat. She says people in the U.K. aren’t prepared for how hot it can get. (J.F. Bisson/CBC)

While he says air conditioning is a good choice for vulnerable people who have no other options, he thinks just about everyone else will continue without for now because of the associated costs.

Energy bills are already biting into the country’s spiralling cost of living and by some measures are expected to hit £4,200 ($6,500 Cdn) a year in 2023. If more homes were to install air conditioning right now, it would be an additional financial and ecological burden.

“Obviously, it can stress the electricity system,” he said. “And we really do have to start to reduce our carbon emissions now if we’re going to stop this weather getting even hotter.”

WATCH | The U.K. is grappling with how to adjust to this summer’s extreme heat:

Unused to high temperatures, the United Kingdom is grappling with how to adjust to this summer’s extreme heat. As the temperature rises, so does the demand for air conditioning in U.K. homes.

As the crew drills holes for air hoses in the walls of Cara Sutcliffe’s Finsbury Park flat, she says she is relieved the unit is going in, especially after July’s heat wave.

“Physically it was quite draining,” she said. “Living in the U.K. we’re not aware of how hot it can actually get and we’re not prepared for that.”

Sutcliffe’s landlord is shouldering the costs of this installation and the energy bill. She feels lucky and knows air conditioning and the cool air it promises are out of reach for many.

“It’s expensive. Unfortunately, with the prices of living going up, it is hard.” she said. “We do need to rethink how we do things.”

Scientists discover paint that could eliminate the need for air conditioning

Why is my car’s air conditioning system blowing warm air?